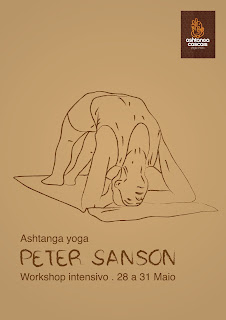 "PETER SANSON GREW UP ON A FARM IN NEW ZELAND. HE LEFT FOR MYSORE IN 1989, HAVING NO EXPERIENCE IN ASHTANGA YOGA, AND HAS SPENT YEARS STUDYING WITH GURUJI. PETER IS CONSIDERED ONE OF THE OLD STUDENTS, AND ALWAYS HAS A CALM AND COLLECTED VIEW OF HIS PRACTICE.


HOW IS IT THAT YOU FIRST STARTED DOING YOGA? This Australian woman came to stay at my friend´s house when i was at university, and my friend rang me up and said, "This woman has come to stay at my house, she eats bean sprouts and peanut butter on rice wafers and does yoga." I went to my friend´s house about a week later, and my friend and i did a class with her in the garage. I did two classes with her. Since that moment, i´ve done yoga. (...) HOW OLD WERE YOU WHEN YOU DID YOGA IN THE GARAGE? About twenty-one. I came here (Mysore) when i was twenty-four. After university i was doing hatha yoga once per week, Wednesdays nights at six. I went every week with a guy called Michael Jones. The teacher at the university recommended me to go to a school in Sydney, but i ended up in Queensland. I was in a health-food shop and saw a sign for Nicki Know and James Brian, so  i studied with them. Nicki and James were doing Iyengar. They came to know of ashtanga through Yoga Journal. (...) Nicki and James decided to com to India in 1988 - had written Guruji and gotten permission to come - and asked me if i wanted to come with them. Them i wrote to Guruji, and it took some time to get a reply, and i had to get a visa, so i ended up coming in January 1989. (...)

YOU DID NOT REALLY KNOW ANY ASHTANGA YOGA? At that stage i did not know any, i didn´t even know a sun salute. HOW DID GURUJI TEACH YOU? (...) He started me on A, and in one week i was doing twelve of A and twelve of B and then sitting down and doind the breathing. That was my program. Then slowly he taught me the standing positions, the two padangusthasanas, then the two trikonasanas. Slowly like that. (...) AFTER YOU HAD BEEN DOING ALL THE OTHER YOGA, AND THEN YOU STARTED THE ASHTANGA YOGA, HOW DID IT STRIKE YOU? WHAT WAS THE IMPRESSION YOU HAD OF THE ACTUAL PRACTICE? I loved it. It was much more active and i liked the way Guruji was teaching it, and it was a much shorter practice. At first i was practicing only half an hour. I was used yo doing a lot more asanas before that. (Now) I was doing very few and a lot of repition and iwas really enjoying it from the first moment. (...)

IN THE PAST YOU HAVE CHARACTERIZED GURUJI´S TEACHINGS AS BEING VERY SUBTLE. Very subtle. He is very much completely in the moment with people, so you connect with him in the moment on that level. He is very subtle in how he works with you in terms of your personality, emotions, any physical or mental blocks, and he knew how to move the energy and move through subtle layers with you. I REMEMBER YOU TALKING ABOUT ARDHA BADDHA PASCHIMATTANASA, THAT YOU HAD STIFF KNEES. I couldn´t bend at all at first. Even though i had done quite a bit of yoga, i couldn´t make a lot of asanas. He was very hands-on, he would get hold of you and mold you into things. you had to surrender to his adjustments, and then you would be safe. (...) surrender up to him, and allow him to take me into different asanas, and then i was safe. (...)


Guruji had a few therapy cases at that time, even with the Westerners.
WHAT KINDS DID YOU SEE? People with spinal or heart problems. A lot of the Indians were older and had health issues. DID YOU EVER WATCH HIS THERAPY? Yes, he taught them in the same class. He had them on simple, modified programs, adjusting them. According to their capacity, he would adjust and slowly work with them. Just simplified everything down, but still ashtanga yoga. (...) WHAT KIND OF CHANGES HAVE YOU SEEN IN YOUR LIFE AND IN THE LIVES OF OTHER PRACTITIONERS? Guruji and his teachings changed my life. I´d graduated from university in New Zeland and was set to start a career in property valuation. But after i started to practice with Guruji, my entire focus was on yoga. I would stay in Mysore till my money ran out, then return to New Zeland and work on the family farm - fencing, pruning trees, doing general work.
When people start practicing in notice their body shape change quite dramatically, sometimes their faces can even take on a different appearance. Also i find it interesting how quickly new practitioners adjust their diets after starting the ashtanga. DID YOU EVER SEE GURUJI AS A HEALER? I had total faith in Guruji from the start. He was a teacher, a healer, and a psychologist - all essential qualities for a yoga teacher. He connected immediately with people, understanding their experiences, and was very supportive of whatever anyone was going through. Ofter things would arise in the practice, Guruji would help. Not always did things directly connect with the asanas, but more with life. I think all the students were learning a great deal about themselves, and it was helpful to have advice from someone so wise. (...)

WHAT WAS THE MOST IMPORTANT THING YOU HAVE LEARNED? The most important thing i learned from Guruji is the need for patience. Guruji once kept me on the same asana for seven years, which broke down a lot of physical and mental barriers. He taught everyone individually; intuitively; and from the heart. When Guruji finally moved me to the next asana, i realized the specific asana didn´t matter; it was more important to focus on the level of attention one brings to the practice. (...)

He always emphasized correct breathing and dristis, and working with the bandhas.
WHAT DO YOU SEE AS THE CENTRAL IMPORTANCE OF CORRECT BREATHING? IF A STUDENT COMES AND ASKS YOU "WHAT´S UP WITH THIS BREATHING THING, WHY DO I HAVE TO BREATHE?" It is the central thing to this whole practice. Without that, it is not yoga practice. Everything is moving with the breath on so many levels. HOW ABOUT MULA AND UDDIYANA BANDHA? Also very important. on an energetic level. Without that, it is not the same practice. Once i started to work with the bandhas with Guruji, my body became light and the energy started to move smoothly. (...) WHAT DID YOU NOTICE FROM THE CORRECT DRISHTIS? It has to do with directing the energy, moving the energy. I always felt that his teachings was subtle and he was always working on that focus of moving energy and directing your attention and focus to certain things. But only when necessary would he correct you. He would get you to work on certain thing for some time, and then when he felt it was necessary he would adjust something. He would never be in a hurry. He would change things gradually, he may give you only one or two instructions in a six-month period, and gradually he would adjust things. Not in one day. He would look for certain things, and when he felt the time was right, he would introduce something else. (...)

CAN YOU SAY SOMETHING ABOUT GURUJI´S CHARACTER/PERSONALITY?
(...) There is one thing Guruji said that has really stuck with me onver the years. He pointed to his heart and said " There is a small box sitting here. In that box is sitting Atman. Turn your attention here. That is yoga." In never forget that. I always felt he was a very heart-centered man, loving toward his students and doing all he could to support us on our journey." 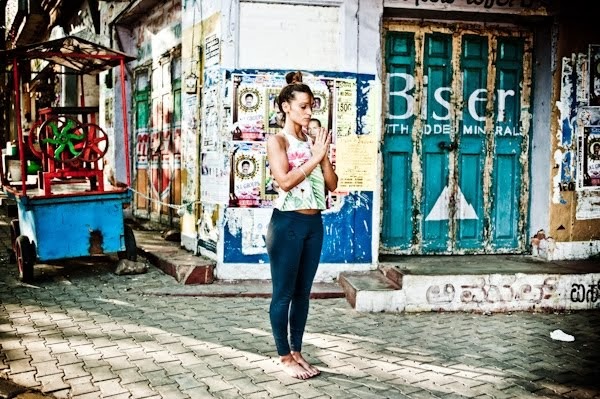